Why Keep a Hunting Journal by Andy May A group of two does and three fawns came out of the swamp around 4:30 and ate on the edge of the overgrown field. Around 5:10 a nice 8 point, probably 2 1/2 year old buck came out into the overgrown field and began bumping the does around. One of the doe started running my way and the buck followed. He offered a broadside shot but caught movement as I drew my bow.  A spike and a 6 pt chased a doe across the field at 6:15.  (Draw bow back slower and smoother. Wait until deer is looking other way or vision is obstructed). I snuck into the area where I encountered the big buck on October 1. Today is the first day I had similar conditions. I snuck in and set up about 60 yards away from where I saw the big buck bedded five days earlier. Just as I got settled I could hear a deer approaching from the nearby corn field. I looked down and could see a very wide white rack walking about 15 yards from my stand in the direction of the swamp. He disappeared into the darkness.  As it got light I could not see the buck or any other deer moving through the area. About 9:30 AM I catch movement and the big buck stands up out of his bed in the same exact thicket he had bedded in prior. He stretched and nibbled on some vegetation then laid back down. I was not prepared for an all-day hunt but I was going to sit it out and wait. Two more times throughout the day the buck stood up, stretched and relieved himself never walking more than a few feet away from his bed. The last few hours of the hunt was really slow as the buck was bedded and I couldn’t see him. Then with about 10 minutes before last night the buck stood up and scanned the surrounding area. His attention was drawn to where he had seen the other hunters on October 1. After clearing the area the buck relaxed and began browsing and working his way out of the thicket. Every step he took she got a little closer within range. Finally right before last shooting like he offered me a shot at 32 yards. My arrow hit its mark and the buck ran off and died in the nearby standing cornfield. Keeping a hunting journal has allowed me to go back and relive each and every hunt I’ve been on, even the unsuccessful ones. It has become a diary of every hunting experience I’ve ever had and that in itself is priceless to me.  Aside from that, the value that keeping a journal has given me has been amazing.  It has allowed me to look back on those experiences that I just can’t quite recall and pick apart details of a hunt itself, a specific property or an even an individual buck that certainly would have otherwise been forgotten. The knowledge I’ve been able to gain through all the little details have definitely shortened my learning curve and made me more successful.

Example 1
There is some river bottom ground that I’ve hunted for years in Michigan. I hunted this particular area quite a bit in my early years because the deer population was so high and it was just plain fun to see so many deer. I sporadically hunted the area throughout the entire season but rarely did I have success or even have sightings of anything mature during most of the season. After a few years though, a pattern started to materialize. I looked back at my logs and noticed a substantial uptick in buck usage right around the third week of October. By the fourth week of October and early November there was usually at least one shooter buck working through the area. As I scrolled back through the data of years of hunting this particular piece the pattern was consistent. This particular area was a prime pre-rut and rut spot. Any hunting before that would yield doe and fawn sightings with the occasional yearling buck. By being able to scroll back through my logs I was able to learn when this particular property was most optimal for taking a mature animal. Since then I’ve been able to do this in countless other areas. Picking up little things here and there that clue you in on a certain timeframe, a certain set of conditions, a certain food source that the area is yielding have all played a part in helping me figure out when hunting a particular area is most optimal. Without my hunting logs I don’t think I would’ve had the memory capacity to recall this information and certainly wouldn’t have been able to pick up the smaller details that impacted deer tendencies and travel such as wind direction, weather conditions, and hard mast production.

Example 2
Let’s look at another example. It was 2017 when I got knock on door permission on a random piece of property in southern Michigan. The landowner was kind enough to let me hunt but warned me that there were several other guys that hunted the small property as well. The whole area in general was extreme high pressure. The very first year I caught a glimpse of a large racked buck in velvet feeding under an apple tree. Although it got me excited, experience told me that just because you see them in a particular area in the summer does not mean they’ll be there in the fall. My concerns came true because as soon as September hit, the buck disappeared. From as far as I could tell there were a couple small doe groups that frequented the property. Another thing I noticed was that the other hunters hunted nearly every day of the week but they pretty much sat in the same stands and ground blind over and over. I hunted the property a few times throughout October, looking for big bucks sign to pop up but it just never did. Then randomly, on October 24th I got a picture of the big buck at a scrape in a small meadow with surrounding producing oak trees. It was indeed the same buck that I glassed in velvet in August. Fresh sign in the form of large rubs, scrapes and large tracks started popping up everywhere.  Over the next three days I had one sighting and a half dozen more pictures of the buck and just like that he disappeared. He randomly popped up a couple more times in November and then he was gone without a trace. I searched high and low for the buck’s sheds or any indication that he had survived, but nothing.  Again I glassed for him in the summer months the following year but my efforts yielded no sightings. I kept an eye on my cameras and hunted some observation stands throughout October but never laid eyes on the buck. Then again, like clockwork the buck showed up on October 24. I set up for the buck on October 25 in the small meadow opening in the timber where he laid down the most sign. He had a dozen or so freshly opened up scrapes and the sign told me this is where I needed to be. Unfortunately that evening  the I didn’t anticipate the swirling winds caused by the small opening and the buck caught my scent, busting me as he approached. He hung around for about three days and then disappeared again. A pattern was starting to emerge. From my best guess he was coming in to the area searching for an early hot doe and then he would leave.

Fast forward to 2019. I had heard this buck was seen in January out in a nearby field so I knew he made it. I sat down dissecting every trail cam picture I had of the buck as well as my hunting journal. It was clear the buck started using the property right around October 24/25th and was there for a very brief time. My hunting logs not only told me what window that I clearly had to target this buck but I was also able to cross reference the wind direction that he seemed to use and where he was coming/going  from during my actual sightings. Essentially my hunting logs, in combination with my trail cam data painted a very clear picture of when I needed to hunt this buck and where I needed to be as well as under what set of conditions. I sat back and waited patiently the entire beginning of the season. The calendar showed a big drop in temperatures on October 24 but with high winds. I elected to sit out the evening of the 24th because of the high winds, assuming the 25th would be a much higher percentage sit as the winds died down. With calmer but still cool conditions I snuck in on the 25th. I sat back from the meadow in a little pinch point where I could get a more consistent wind. On my way in I came across several opened field scrapes that had just been freshened up. I was able to identify his track in several of them.  I climbed my tree and as the evening progressed, hunters started penetrating the surrounding area. Most of the evening was uneventful but just before dark I see a large bodied deer stand up and exit a point jutting out into a field. It was indeed the huge buck I was after. He slowly approached my location while remaining hidden in security cover heading towards the little meadow with the primary scrapes and oak trees. He presented the shot at broadside shot at 25 yards with less than 10 minutes of shooting light left. 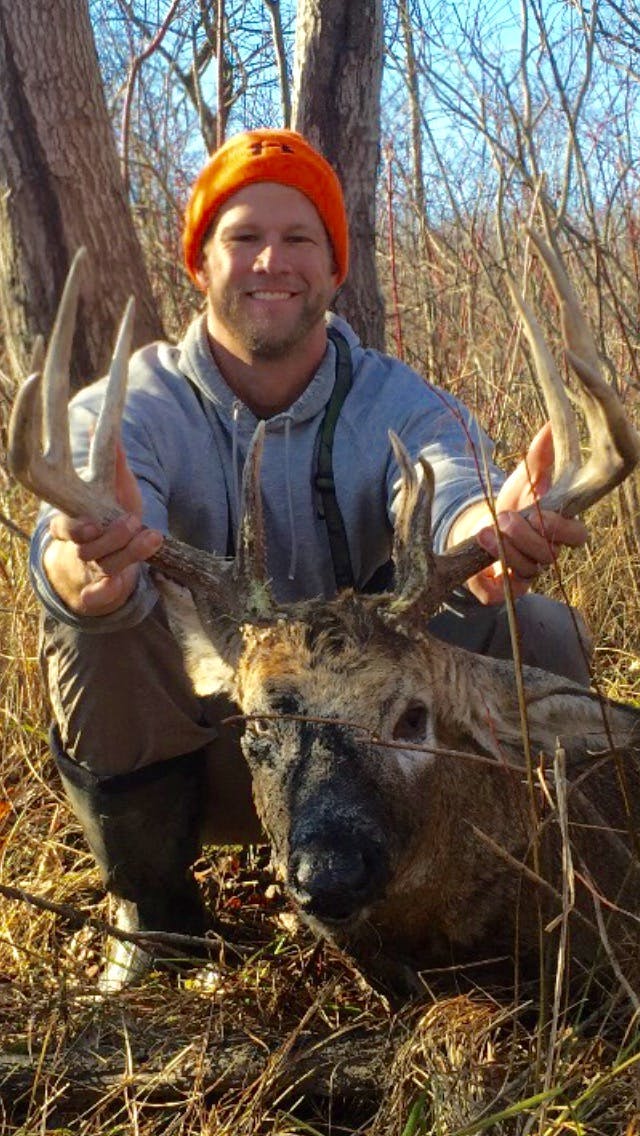 These are just a few examples of how keeping a detailed hunting log has helped me. There are countless other examples and things that I have pulled from that data that I’ve helped me become a more effective hunter and just learn about deer or how they utilize an area.

With the new Spartan Forge app keeping a hunting journal is efficient and painless. Simply enter in your sightings data into the journal feature and all of the conditions are automatically populated. No more handwriting everything out and looking up the historical weather for the hunt if you weren’t able to write it down the day of the hunt. I can’t tell you how rewarding and beneficial it has been for me to be able to pull information from previous hunts or just to go back and read and relive them.