Is There Too Much Ego In Hunting? | An Inside Threat To The Hunting Community As you scroll through your favorite social media platform(s), there's a strong chance you've seen some form of deer shaming or hunter bashing. Comments like, "You should have passed," or, "Maybe you should shoot does," or, "I know it's not the biggest buck, but..." are all too common.

Ego is not confidence. Confidence is defined as evidence of our strengths and abilities. Ego is not something earned. It's a kind of unhealthy belief of our own importance. It's that devil on your shoulder whispering that we're better than other people, that our needs matter more. Too much ego creates a sense that we need this success, like killing a giant buck or worse, the recognition of it rather than the intrinsic value of being afield and harvesting your own food. It's the belief everyone is watching us; as a result, we must be the greatest, having harvested such a tough-to-hunt animal.

Freud explained ego with an analogy—our ego was the rider on a horse, with our unconscious drives representing the animal while the ego tried to direct them. Modern psychologists, on the other hand, use the word "egotist," which refers to a pathologically focus on one's self and disregard for anyone else. This seems like a possible place to arrive, especially since bow hunting is more of a singular pursuit.

The more common form of ego I'm relating to deer hunting is the one that demands we ought to get our way. The desire to be better than, more than, or recognized for, far past any practical reasons—that is the ego I believe to be threatening the hunting community from within.

Picturesque TV show grip and grins have eroded the Fred Bear version of hunting and have created an egotistical beast over several years. This ego issue has generated a sense of superiority and certainty exceeding the horizon of the confidence and joy that goes into hunting whitetails. Football coach Bill Walsh said, "self-confidence becomes arrogance, assertiveness becomes obstinacy, and self-assurance becomes reckless abandon." Let's not recklessly abandon what we truly love about hunting because we “need” a grip and grin with a 150” whitetail for social media to prove to others we don’t even know that we’ve earned it. Of course we’ve earned it. The reward is in the pursuit and experience itself.

We all have an ego, though. It's not all bad. We've all been guilty of having too much of it at one time or another. Hell, if anything will lend itself too much ego, it's killing a mature whitetail in its domain.

The thing about ego is that (in my opinion) it is a much less effective means and strategy to make a community stronger than humility and confidence are.

Things were very different back in the day when deer hunters had to physically stop at a local registration station to register their deer. Or were they? Of course, in person, things indeed were different. It was congratulated when someone pulled up with a spike buck on their tailgate, just as the 180" monster whitetail was. I'm willing to bet there was judgment, though. It was just never said out loud (Look at that little spike, or it must be nice to have land to kill a 180”). That's where social media complicates things. In person, no one would go out of their way to put another hunter down. Unfortunately, plenty of keyboard cowboys are waiting at the drop of a hat to give their two cents on why a hunter should or should not have tagged their deer.

I've adopted the phrase, "My tag, my hunt." It has become a brand staple for the Okayest Hunter. This means it should not be judged whether you're tagging a brute, dink buck, or doe. Of course, if someone is willing to buy my tags, I'll consider letting them have a say in what I tag, so long as it's legal and ethical. 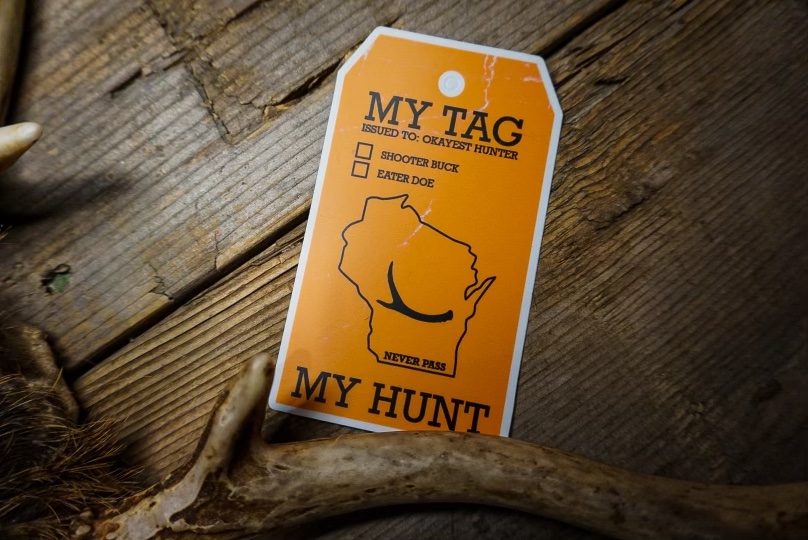 How did we get here? We're so far from what Fred Bear, the father of bowhunting, said - “Immersing yourself in the outdoor experience and respecting the wildlife you hunt."

Maybe I've been too deep into learning about stoic philosophy and human nature from the likes of Marcus Aurelius, Ryan Holiday, and Robert Greene 🤷‍♂️.

Let's revisit the full quote from Fred Bear. He said, "Go afield with a good attitude, with respect for the wildlife you hunt and for the forest and fields in which you walk. Immerse yourself in the outdoor experience. It will cleanse your soul and make you a better person."

The issue is that even though most hunters echo and cheer this sentiment, many still do the exact opposite. They go on defense by saying it wasn't the biggest buck. Conversely, others are telling hunters how they should use their tag and making people feel ashamed of what they've so proudly harvested.

Every deer hunter is at a different step in their hunting journey, and that's okay. Remember from Hunter's Education that as a hunter gains experience and skill, they'll typically traverse through five stages of development. However, not everyone passes through all these stages, nor do they necessarily do it in the same order.

The five stages of hunter development are:

So when someone condescendingly says something like, that's the kind of buck a 14-year-old would shoot, what do you think the 14-year-old scrolling through social media will think? It's degrading, and now we have young hunters not shooting deer. That's because they're holding out for the trophy buck they've seen on TV or YouTube or they’re afraid of ridicule, and sadly, rightfully so.

If I were to point to a single thing that's causing this, I'd say ego is to blame. When I sat down with Michael Waddell from the Bone Collector, he said, "Hunting doesn't make you badass. It's badass that you get to hunt." He's spot on.

When a person experiences success, a few things happen. I attempt to apply these laws of human nature to deer hunting.

When you experience success, there's a sense of entitlement that comes along with it. Once you experience success, you feel like you're entitled to it. It's one of the reasons human beings don't like going backward. Think about it. Once you tag a 6-pointer, you might only want to tag an 8-pointer, or once you've tagged an 8-pointer, maybe only a 10-pointer is acceptable, and so forth. So it may be the case that someone having success harvesting mature bucks is now entitled to them.

From there, paranoia can set in. Now that you're tagging mature whitetails, you're paranoid that someone filling their freezer with tomorrow's buck today is limiting your opportunity at those same bucks as they would have aged up into a big buck.

Any mature buck hunter consistently killing mature bucks every year doesn't care about what others are doing with their tags. They're certainly not worried that someone hunting a spike buck is hunting in the same league as them, nor in the same way or territory.

Other things worth considering are healthy deer management, not just Quality Deer Management. As Doug Durren has stated on the Okayest Hunter podcast, you ought to take the whole herd into account along with various circumstances within different regions. CWD is a good example. Young bucks are spreading CWD far more than mature ones - I'm sure the "young bucks" can relate as we reflect on our time in our early twenties. Younger male deer are breeding more than mature bucks. Whereas the older ones are far more prone to contracting CWD.

According to Robert Greene in the Laws of Human Nature, an appetite for control comes with success. Who are the hunters telling other hunters how to use their tags? This one doesn't fit my attempt to apply these laws because several hunters telling others how to hunt have not had much success. In life, plenty of people in the stands tell the folks on the field how to play the game. I'd like to see a 40-something-year-old with a beer belly run the ball to the endzone.

More importantly, the folks tossing out such negative comments have no idea what that hunter's life is like. Maybe that grip and grin they were so proud to post was their first deer as a bow hunter, adult-onset hunter, their last hunt with grandpa, or their first out-of-state hunt. It could have been their first hunt with their child. You just don't know.

If you want guidance on handling some of these hostile social media comments, check out the Wired to Hunt podcast the Okayest Hunter crew got to do. We listed out ten (well, actually eleven) Okayest Hunter commandments. Most of it is just about being kind and not going out of your way to put others down.

Most of all of this 1% are just really loud. Unfortunately, negativity is inherently louder than positivity, much like how the news reports on 1% of the bad in the world. Therefore, it's our job to make the positivity in hunting louder! When I was in college, I worked for a call center. Out of the thousands of calls I took during my time there, I only can remember one call that was made by a customer to say thank you. One positive call. 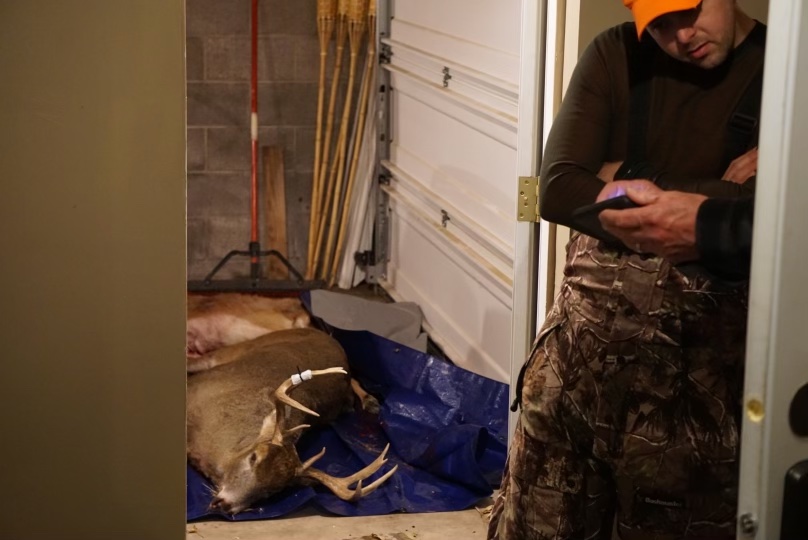 When we see hunt shaming going on, let's make sure we say what should have been said; “Congratulations!” especially if it's someone you see in GoWild but it rarely happens there becasue the community is so strong!

Remember to have fun; it's deer hunting. Remember what it was like when you started out, when every hunt and opportunity on a deer made you feel like a kid on Christmas? Bring that spirit to the woods with you this hunting season, and every season after that.