The story of my election day 8-pointer.

It was election week, Tuesday, November 4, 2020. I cast my vote earlier that day. Earlier that week, I missed a shot on an 8-point buck. It almost seemed like I was being mocked when I saw a buck waiting in line to vote. Go figure.

At this point in my hunting career, I had spent years interviewing other deer hunters about various hunting tactics on the Okayest Hunter podcast. Things like avoiding other hunters, reading the wind, picking the best hunting spots based on buck bedding, and so forth. I was finally starting to combine the deer hunting puzzle pieces and apply all I had learned. It all paid off. It was almost like the deer I shot read the script, as the saying goes. I couldn't believe it.

When hunting season is in full swing, the first things I check my phone for in the morning are the weather and wind forecast and my cell cam notifications. As I'm brushing my teeth, I'm scrolling through trail cam photos and Spartan Forge screenshots of dropped pins to see what spots might work best for the upcoming days in the deer woods. From there, I'm usually texting the rest of the Okayest Hunter crew to share the updates as they're doing the same. We're all pretty damn excited to say the least. Of course, my wife asks, "Who are you texting this early?" To which I reply, "Who do you think lol?!" The fellas, about deer hunting, what else!?

On election day of 2020, my good buddy Joel had been texting me about a property close to home and shared some city ordinance documents stating that a particular piece of land was open to bow hunting only. Naturally, I pulled up Spartan Forge and started dissecting this property. I compared the wind direction that day and upcoming days and made some broad-stroke assumptions about bedding areas. There was only one place to access the property legally, so I arrived at a spot I thought might work if my boots on the ground reality aligned well with my e-scouting. I called Joel back and said, "F it. I'm hunting it today. I'll be there around 3 O'Clock. I busted my ass to get the rest of my work done for the day and then told my wife. We had to call in my mother-in-law to help watch our kids so I could test my theory and see if I could "get it done."

Most of my gear was already in my truck, so I jumped in and drove the short distance from my house to this newly discovered public hunting property.

Based on how I thought and assumed a buck might leave the assumed bedding area to traverse to the primary food destination, I cut in on an angle to ensure I wouldn't stink up his potential travel corridor. On my way in, I kicked up a couple of does. I thought that might have a negative impact on my hunt, but they went in a different direction than where I was headed. 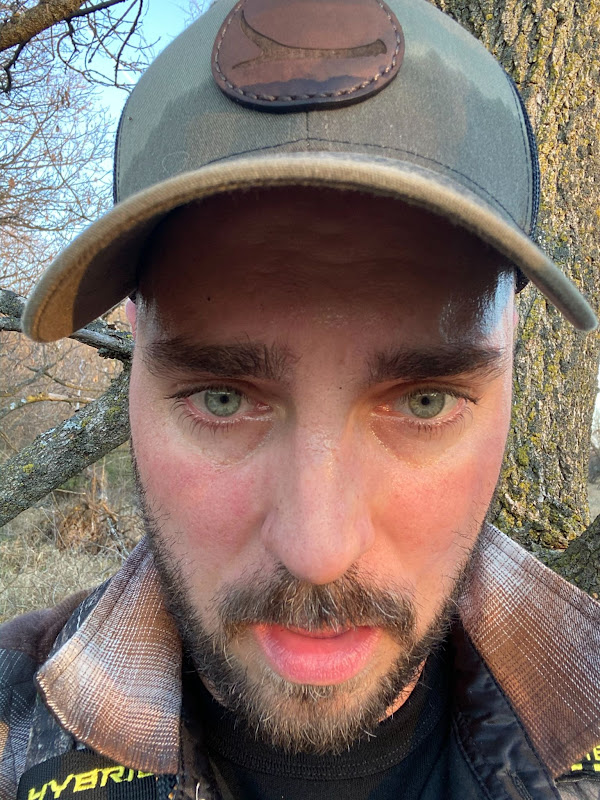 I eventually arrived at the base of a gnarly tree that didn't have a lot of options for stand placement. I only ended up using one climbing stick and hung my stand. I had practically run to this spot to beat the clock and get set up and quiet before any deer would be on hoof. I was drenched in sweat as a result. My buddy Joel set up, too, a bit further in once he had learned where I was. 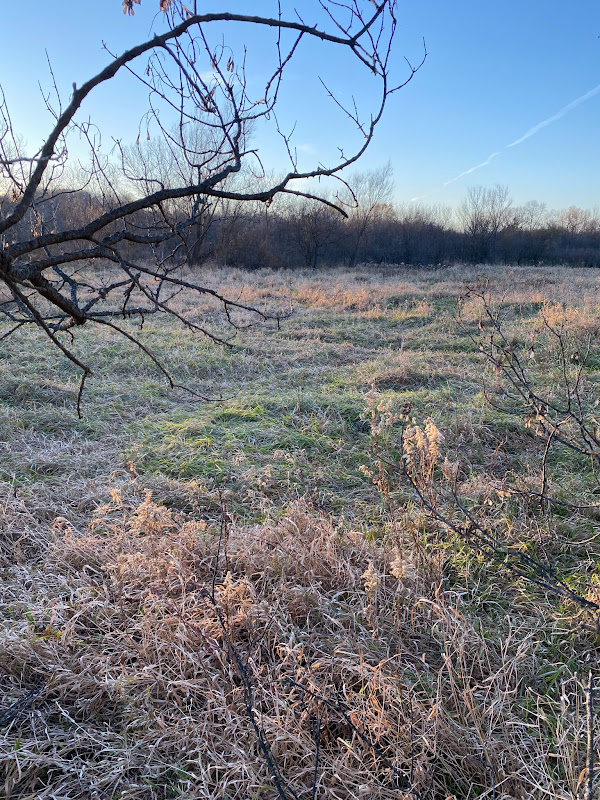 As I sat and waited, thinking I had done everything right, I began to hear what I thought was a large-bodied deer make its way out of thick cover. Sure enough, it was a nice buck. Holy shit, I thought. So far everything is going to plan. I'm not silhouetted in the tree, the wind is entirely in my favor, I left no trace, he came out of what I thought would be bedding... Maybe I'm not cursed as an Okayest Hunter, after all! Though, I had some moments getting set up per usual.

Then, the buck turned to cut a path coming to my direction. He was almost perpendicular with me as I began to draw my bow back, except the limb of my bow would have struck a tree branch upon release. So I cocked my bow sideways, tilted my head to align my vision through my bow sight pin, and let an arrow fly. I didn't give him the 'ol meh. This was the first time I shot a buck with my bow, so it didn't occur to me.

Because he was moving and I didn't stop him, my arrow hit farther back than I had anticipated. F***. I thought, oh no. I messed up my chance. Everything had gone perfectly until my arrow left my bowstring. I had a complete pass-through and good blood. But thought I'd have a long track ahead of me. The buck came running right towards me through a blowdown and piled up ten yards behind me. I thought, huh? Maybe he's lying down to assess and rest. So I nocked another arrow and thought, this is my chance. I have to be very intentional about how I go about this.

But as I listened, it sounded like he was dying. I was baffled. I literally jumped out of my stand. You know, since I was only one stick high and slowly approached the buck, bow, and arrow in hand with a nocked arrow.

Wait what? Is he dead? Like, really dead. How? I hit him far back. I called my Dad. After freaking out and telling him, I had just shot my first buck with a bow he helped me understand what had happened. I had hit the buck in the femoral artery. He died within minutes and bled out fast from the initial point of impact. I got very lucky. 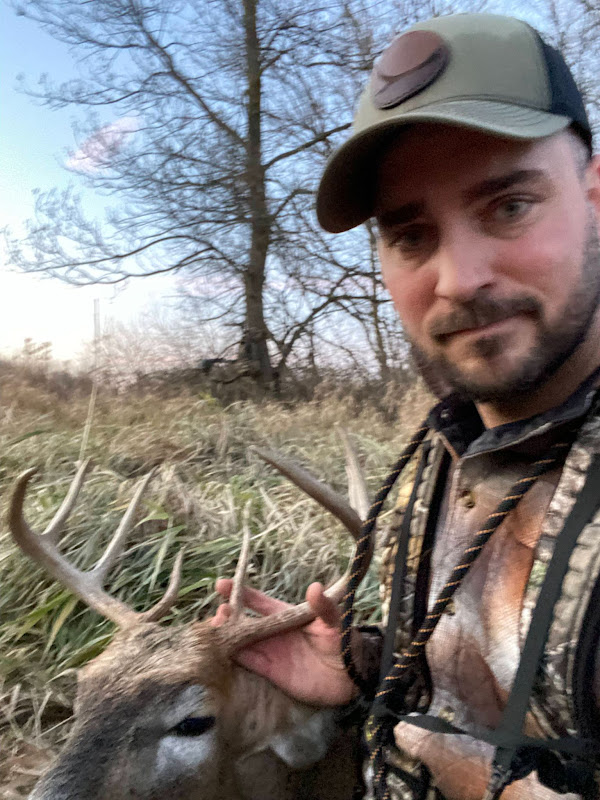 That's the story of my first ever buck with a bow, which also happened on public land on a virgin sit on a new-to-me property. Remember, this was days after I had missed a layup shot on a buck on public. I thought that was my only chance that season. I'll never forget my daughter was three at the time, and when I had Facetimed with my wife to tell her the news, my daughter asked if she could eat it! My buddy and podcast co-host, Greg, drove over to celebrate, cut out the loins, and we ate that deer that night with my daughter. 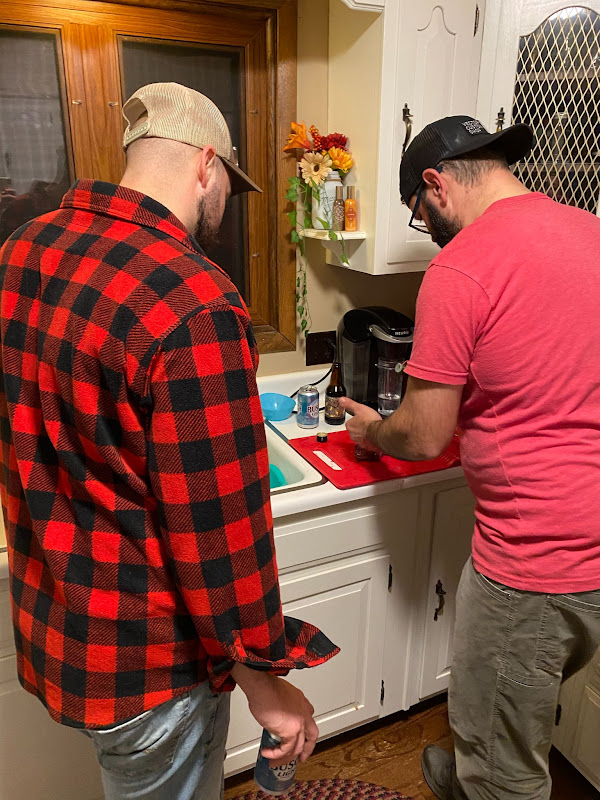 The story's moral is that you never know what will happen unless you try. Additionally, keep learning. Each season, I pick up something new I hadn't realized before; over time, that knowledge starts to compound. Good luck this season!